I Am An Introverted Fighter

You know when you have one of those “A-HA” moments? 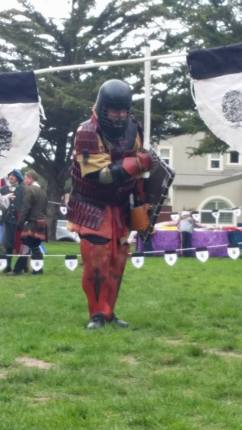 No, not when you feel a sudden urge to sing “Take On Me” or “The Sun Always Shines On TV”.

I mean when you suddenly realize something about yourself that should have been obvious but turned out to be eluding you for a really long time.

I am an introvert. That is not a particular revelation to me though it often comes as a surprise to other people given that they know that I am a magician and an actor. It’s hard for a lot of people to reconcile those things together; how can I be an introvert if I like being on stage? If you’re curious about it go read my article on The Performing Introvert.

The truth is that I often forget that I am an introvert. How is that possible? Because my life routine is such that I don’t often find myself in situations that I am unprepared for.

Basically all introverts can manage any social situation if they are given enough opportunity to prepare themselves for it. All the rehearsing I do for a play or a magic show is not just to be able to do the show but to prepare myself for the level of stress that I will be facing just because it’s a social situation and to some lesser or greater degree I will be the focus of attention.

In the SCA my social circle is pretty wide and there aren’t a lot of situations I might find myself in where I will experience social anxiety. And even if I do, it’s extremely easy for me to extricate myself from those situations and move to another situation that is more comfortable.

When I first took up rapier fighting I had already been in a pretty stressful set of circumstances and taking it up was a way to move myself from one set of social anxiety to a different place that I thought would be more welcoming. Because my life was full of stress at the time it never dawned on me that the anxiety I was feeling when I first stepped on to the rapier field was anything other than that.

After a while the rapier community became my own and my social anxiety on the field dissipated, though that anxiety was still masked by the other stresses that were current in my life.

The regular stress of my life was white noise against which the specific social anxiety of fighting was masked.

Eventually those regular stresses subsided, but by then I was well enough integrated in to the rapier community that I experienced virtually no anxiety anymore facing any of the fighters I would normally see.

So now all these years later when I decided to finally take up heavy fighting it never once dawned on me that fighting would bring on social anxiety. Not only that, but the level of social anxiety is mysteriously high and I was still blind to it because I had no frame of reference to make me think “hey, this is my introversion that’s causing this.”

So I’ve been struggling with this problem. Why is it that some people I can face on the heavy field and not be upset or anxious, and others just freak me the fuck out?

I mean I am not a threat to anyone on the heavy field. Not yet. Eventually, but not yet. I have a lot to learn, and I have to train my body, and these are all things that I am excited about for my own personal growth. So I’m not particularly afraid or anxious about being beat up. It’s going to happen. That’s just part of the process.

In the short time I’ve been fighting I have squared off with fighters from my level all the way up to Dukes. I’ve experienced fights with people who are my friends and people I only barely know.

At first I noticed that if I didn’t particularly know the person I was about to engage my anxiety level would pick up. Which made sense so I didn’t attribute anything to that.

Though I will say that on a small handful of occasions I have already found myself in unexplainable tears dealing with an overwhelming amount of anxiety and emotion. And I should say that this is not a thing that I am afraid of. I know that I can be emotional at times. I know that I can shed tears publicly even and it is no threat to my masculinity or my self image. The only thing that I ever worry about is whether or not I understand why it’s happening at the moment. So when the tears come for unexplainable reasons that’s when I get concerned. (I’ve also been known to revel in tears because something moves me that much so this isn’t an entirely unusual place for me.)

After all of that I started to focus on a pattern that I thought I detected which was that I thought I was feeling a certain amount of anxiety when I faced off with someone I had reason to believe had no respect for rapier fighters or the rapier community at large. Despite the progress that has been made in recent years, and especially with the establishment of the Order of Defense, I still see people who are disdainful of that part of the larger fighting community. It is a problem that is gradually diminishing, but it is still there.

Let me be clear though. I don’t, in any way, think that any of these fighters that I have faced have meant to “put me in my place” or otherwise “beat me down” because I am a rapier fighter. Not at all. What I am expressing here is an outgrowth of one of the social anxieties that introverts experience.

Introverts can’t help but look for patterns and problems in social situations. We do it because we are planning how to protect our fragility. Introverts can also be amazingly insightful when it comes to social situations because we are so good at seeing all the patterns and possibilities. The difficult part of it is that we can and often do find problems where none actually exist.

So here I am thinking that the problem is this more complicated assessment of my opponent as someone who doesn’t like me or doesn’t like the community I come from and I played with that idea in my head for a little while, but I soon realized that it was to complicated, not to mention hugely unfair and disrespectful. None of the fighters I have met or fought deserve any such suspicion from me. General social anxiety issues and social issues resulting from being an introvert are usually not that complicated.

No, like most things the answer is a great deal more simplistic. Plain and simple the anxiety I feel when I am on the heavy field is because I don’t yet feel like I am fully a part of the community.

To a certain extent I have done it to myself too. After all, I have made a big deal out of the fact that I want to be an example as a “cross-trained” fighter. As someone who engages in Rapier, C&T, and Heavy pretty much equally. This is my path. It is a path I believe in. It is a path that I hope to encourage others to explore.

But the thought that these are not yet “my people” appears to be the true source of my heavy fighting anxiety. Not because I haven’t been welcomed but because I haven’t yet found where I fit in to the community at large. I have been welcomed. I have a great set of friends who are my cheerleaders and my teachers who want to see me succeed.

However like anything else the only way you get better is by doing it more. All of my friends and supporters have been doing all they can to encourage me to do more, and it’s wonderful. The struggle for me is the thing about introverts; we don’t do anything until we’re ready to.

So in a way, here is my plea and my apology to all my supporters.

Please continue to be my supporters and my cheerleaders. It’s the cumulative effect of support that gives me the “social momentum” I need to be able to get out on the field in the first place. And every time I manage it the amount of “social momentum” I need will get smaller. It’s the same thing that happened when I was first rapier fighting though I didn’t really recognize it as such.

And my apology is this – there simply are going to be times when I can’t do it. When the social pressure is more than I have the energy or strength to deal with. I don’t want to let down my teachers and my supporters and cheerleaders. You all put a ton of energy in to me. Sometimes I can’t cross the finish line but it should never be seen as a failure on your part. The trick will be that I need to remember that it isn’t a failure on mine either.

As I get over myself and get over my feelings of being outside the community I will become a more active and more engaged fighter. I’ll be able to get to that threshold of just picking up my sword and shield and letting whatever happens happen.

All martial arts that I have ever participated in have stressed on some level or another the idea of “Know thyself.” Becoming a better fighter is not about how many people you have defeated in combat but by how often you have beaten your own limitations. You can’t beat those limitations until you know where they are coming from.

I have mentioned in the past that I have dragons to fight. I think I may have just uncovered the sneakiest of them all.